The Pinkerton Link Story: creating a forest out of nothing!

In the beginning: there was the Sludge Paddock!

Western Water owns a 692 hectare property at Butlers Rd, Mt. Cottrell where it operates the Melton Recycled Water Plant (RWP). A large part of the property is currently leased for farming activity using recycled water from the Melton RWP. The majority of the property consists of agricultural pasture but also incorporates wastewater lagoons and infrastructure, agricultural structures and areas of native vegetation such as Pinkerton Forest and the Werribee River. Melton RWP is within the Victorian Volcanic Plains (VVP) bio-region and is found 1 kilometre west of Mt Cottrell.

Western Water, in association with Pinkerton Landcare and Environment Group (PLEG), has been undertaking biodiversity enhancement works in Pinkerton Forest for 20 years and along the Werribee River valley for the last ten years. Pinkerton Forest can be found in the centre of the Melton RWP and consists of approximately 35 ha of remnant plains grassy woodland. Approximately 3.8km of river frontage exists where the Werribee River borders the western boundary of Surbiton Park and cuts a deep volcanic gorge in the landscape. The Werribee River valley contains patches of poor-medium quality remnant native vegetation. Western Water has to date been undertaking revegetation works along approximately 2km of Werribee River frontage in partnership with Melbourne Water and PLEG.

Bordering Surbiton Park is a Melton Shire Council owned remnant native vegetation patch known as Bush's Paddock which lies approximately 370 metres north of Pinkerton Forest. Pinkerton Forest and Bush's Paddock are separated by an area of land on Melton RWP which has previously been used for the controlled disposal of sludge from the waste water treatment process. This area, once known as the 'sludge paddock', is no longer used for disposal of sludge. Deposition of high nutrient wastes by Western Water ceased in 2007.

Western Water has recognised that management input is required to ensure the long-term persistence and enhancement of biodiversity values of Melton RWP due to a general awareness of best practice environmental management, planning and compliance with statutory obligations.

Several small plantings were undertaken by PLEG on the narrow strip on the eastern side of the access track, this was in a nutrient free area, a few Sweet Bursarias and a Drooping Sheoke have survived. The casuarina was grown from local seed by Irene Cook PLEG member.

In recognising the biodiversity values of the property, Western Water would like to further enhance the biodiversity attributes of Melton RWP by creating a habitat corridor between Pinkerton Forest and Bush's Paddock by revegetation of the sludge paddock with indigenous flora species. The habitat corridor will link the two fragmented remnant vegetation patches and allow native fauna to traverse between the two areas, enhancing the significance and importance of the two sites. Western Water has received joint funding for the project through the Vision for Werribee Plains (V4WP) grants program run by the Department of Sustainability and Environment.

Pinkerton Forest is a remnant Plains Woodland approximately 35 hectares in size. The vegetation is mostly comprised of mature Grey Box (Eucalyptus microcarpa) with a moderate quality understory due to a history of cattle and sheep grazing. In 1992 Pinkerton Forest was fenced and rabbit proofed and has since been managed to improve the biodiversity of the forest. Grassy Eucalypt Woodlands of the Victorian Volcanic Plains have recently been listed as critically endangered under the Environmental Protection and Biodiversity Conservation (EPBC) Act 1999.

Bush's Paddock is a Melton Shire Council owned reserve located on the north east boundary of the 'sludge paddock' and has had a long history of stock grazing however recent plantings, weed and pest animal control is beginning to restore the site. The vegetation is remnant Plains Woodland but also contains large areas of native grassland. Natural Temperate Grasslands of the Victorian Volcanic Plains are also listed as critically endangered under the EPBC Act 1999.

Pinkerton Forest and Bush's Paddock are vegetation relics of pre-European settlement and provide many habitat opportunities for ingenious fauna species. Within a five kilometre radius of the Melton RWP, a total of 380 hectares of grassy eucalypt woodlands exist in four fragmented patches and is a hotspot for this type of vegetation community.

Pinkerton Forest and Bush's Paddock are examples of fragmented vegetation or habitat islands. Animals in an 'island' situation are vulnerable to catastrophes such as disease, bushfire and gradual changes like inbreeding and variations in climate. Significant fauna species have been recorded in these vegetation communities.

The habitat corridor will provide native fauna with a larger habitat area, increased available food supply and promote healthier and larger populations. The link will also create a greater likelihood of sustaining populations which undergo any fluctuations or catastrophes.

Scraping of the southern area would begin at the end of Year 1. Seed collection for direct seeding of scraped area would also occur in Year 1 during spring or when appropriate.

A corridor along the area east of the north-south access track will be constructed in Year 1. This would involve multiple herbicide applications followed by tube stock plantings of tree and shrubs species. Work on a corridor would begin ASAP, last planting could be undertaken as late as September. Northern area following cropping would be subject to multiple herbicide applications followed by plantings at end of Year 2/Year 3.  Seed collected during Year 1 and two would be used to germinate stock. Direct seeding of native grass species could introduced to this northern area in Year 3. Direct seeding could be hand broadcast or GA direct seeder.

The sludge paddock has been used for controlled disposal of liquid sludge from waste water treatment process for 20 years. The disposal of sewage sludge over many years has altered the profile of the soil surface in comparison to the surrounding land. The disposal of this material may have also increased the nutrient loading in the soil. However the disposal sludge has ceased more than two years ago and it is expected the nutrient concentration would have reduced. Soil analysis may be required to determine any constraints to the revegetation process. The consultant is not expected to conduct the soil testing, however, should advise Western Water on types of analyses and the extent of soil testing required. The consultant is expected to interpret the data to determine the possible impact on vegetation and recommend any alteration to the site to minimise adverse impact on vegetation. 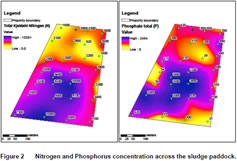 Soil analysis of Nitrogen and Phosphorous in the soil determined that the sludge in the southern half of the paddock needed to be scraped the depths were 10 - 20cm as mentioned in the text. This has been completed which is an achievement.(Click to view enlarged Image)

The understory across the majority of the paddock is a mixture of introduced annual grasses, herbs and prostrate shrubs. High priority species for control may include but not limited to Galenia (Galenia pubsecens), African Boxthorn (Lycium ferocissimum), and Serrated Tussock (Nassella trichotoma). Lower priority species are present onsite including Toowoomba Canary Grass (Phalaris aquatica), Kikuyu (Pennisetum clandestinum) and Wild Turnip (Brassica sp.).

The group agreed on protection of the remnant Grey Box trees in sludge paddock as a priority. 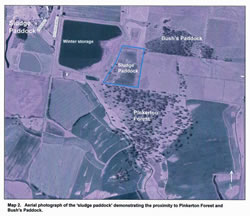 This photo illustrates the importance of the 'Sludge Paddock' as a link between Bush's Paddock and Pinkerton Forest. Hence its new name of 'Pinkerton Link.'

Also, the name 'Pinkerton Link' is much more environmentally appropriate than 'Sludge Paddock'!

The Pinkerton Link, will eventually be part of a contiguous Grey Box Woodland.

Long term strategic planning for PLEG is to seek funding to acquire part or all of the privately owned property between Pinkerton Forest and Bush's Paddock. This will create a much more environmentally viable Grey Box Woodland.

The creation of the Pinkerton Link Project was celebrated in Victorian Landcare magazine in 2010. 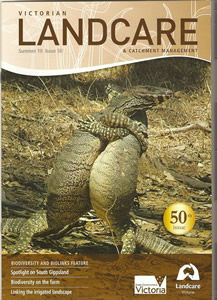 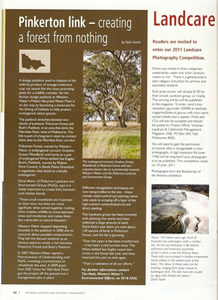 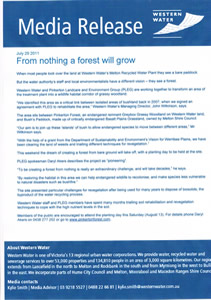 In 2009 Western Water applied for a grant for 'Pinkerton Forest and Bushs Paddock Biodiversity Corridor' from Vision for Werribee Plains, DSE. This was successful and a Project Control Group was formed, these members were from DSE, WW and PLEG. The project began with an intensive weed control programme.

Barley cropping and sheep grazing contributed to removal of nitrogen from the soil.

The seed for the revegetation has been sourced from either Pinkerton Forest, or its extension within Bushs Paddock. 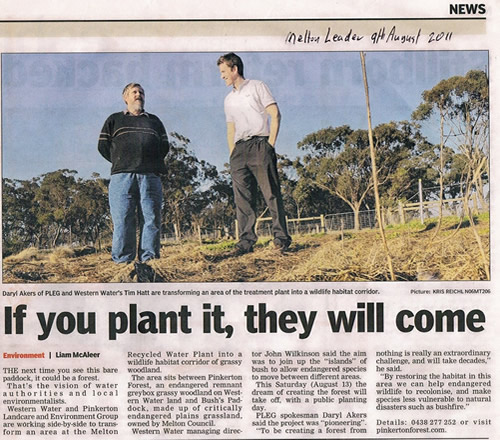