Pinkerton Landcare and Environment Group have recently placed three nest boxes in Pinkerton Forest. Many Australian native animals are ‘obligate hollow users’ which means that they need hollows in which to nest. Tree hollows are in fact necessary for their survival. These include many of our much loved species such as Kookaburras, parrots, cockatoos, owls, ducks and possums. 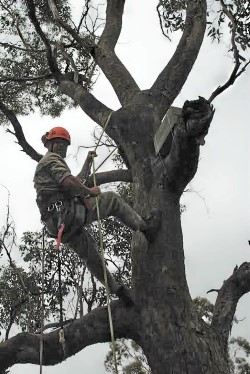 Even quite large wetland birds such as Wood Ducks and Chestnut-breasted Shelducks nest in tree hollows. The tiny newly hatched ducklings leap from the hollow to the ground, to be led to the safety of water by a parent. Natural hollows in tree trunks or old broken limbs provide both protection from predators and insulation against extremes of hot and cold weather. Even dead trees provide valuable wildlife habitat and nest sites! Removal of old trees with hollows is in fact a major reason for the disappearance of much of our native wildlife.

Pinkerton Forest is an old growth Grey Box Grassy Woodland and is a small remnant of the woodland that once covered much of the Volcanic Plains of the Western Region. There are many old tree in the forest, several hundreds of years old. However during over a century of heavy grazing no new trees were able to grow. Regrowth of Grey Box trees has only occurred since unrestricted grazing was excluded a decade or so ago. Therefore the forest consists mainly of old trees and young saplings up to five – six metres in height.

These ancient trees have many hollows that provide homes and nesting sites for native wildlife. However old limbs and sometimes old trees fall during storms and windy weather, and it takes about 80 years for trees to grow old enough to create hollows suitable for wildlife. As the younger trees are only a decade or so old, there may be no new natural hollows created for many decades, so the possibility exists that the supply of tree hollows will diminish.

Nest boxes will help address this shortage as trees fall, until new trees are old enough to create new hollows. The boxes were built as Kookaburra nest boxes but they should be large enough to suit a variety of wildlife. They are not nearly as suitable as natural hollows but they may help alleviate the shortage of such hollows in the short term, until more hollows are formed naturally. We will probably place more boxes here in the future, as become necessary.

Monbulk Landcare Group had offered surplus boxes to environmental groups who may have need of them, so Pinkerton Landcare and Environment Group took advantage of their kind offer. They had even been painted with decorative motifs that enhance the camouflage pattern! The boxes were made by Bayswater Secondary College in conjunction with Bunnings Bayswater.

Monbulk Landcare group notified Melbourne Water that they had surplus boxes who in turn notified other Landcare groups that they were available, thereby facilitating the donation of the nest boxes to other groups

Will Clegg, an arborist who works at Melbourne Zoo, did the hard work of placing the boxes high in the trees. His work was most spectacular as he climbed each tall tree with the aid of climbing ropes. They needed to be placed at least four metres above the ground to be suitable as wildlife nest sites and safe from predators.

It is to be hoped that this coming spring and in years to come these boxes will be occupied by native wildlife, until new tree hollows can be created by nature.