On Sunday 12th April 2015 the Ringwood branch of the Field Naturalists Club of Victoria visited Pinkerton Forest. About 35 people participated, making this one of our largest visits to Pinkerton. The Field Naturalists were most impressed with the forest and discussed the possibility of returning, perhaps in spring.

The visitors saw a total of 48 bird species; 49 if we count the New Holland Honeyeaters in a front yard at the Mt Cottrell gate. Along the lane that leads from Mt Cottrell Road to the Forest we saw several Goldfinches, Flame Robins and Willy Wagtails, Yellow-rumped Thornbills as well as several House Sparrows and a Diamond Firetail.

We also saw 4-5 Diamond Firetails beside the lane that leads to the shed. We saw several Diamond Firetails at this same spot on the last Birdlife Australia survey. There were also about 50-60 zebra Finches on the fence bordering Pinkerton Link. They were continually flying to and from the paddock, very noisily. 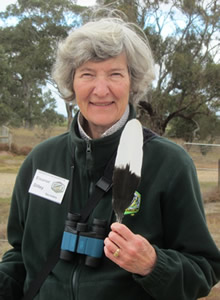 There was excitement when several observers reported a female Pink Robin, identified by several observers by its brown colour. We were told that other female robin species are grey in colour: only the female Pink Robin is brown. One visitor had been studying the differences between the robin species after reading about one being seen recently in nearby Eynesbury Forest. However, there is still some lively debate among bird experts as to whether the bird is a female Pink Robin or a female Flame Robin! Consensus appears now t that it was probably a Flame Robin. A graphic example that identifying various similar looking female robin species can be sometimes difficult, especially when moving about among the foliage high in a tree!

Another visitor picked up a fresh looking White-bellied Sea-eagle tail feather beside the graves of the pioneering Pinkerton family. A few years ago a pair of sea-eagles nested in Pinkerton Forest for two years running. They had taken possession of the forest after an aerial battle with the resident Wedge-tailed Eagles. The Wedge-tailed Eagles have since retaken possession of the forest and successfully nested here last year, in the sea-eagles’ old nest! However, the sea-eagles are still often seen, along the Werribee River or circling over the sewerage treatment ponds looking for fish and waterbirds, and both around and over the forest, (when the wedge-tails are not present). The large feather is tangible evidence that the sea-eagles still maintain a presence here.