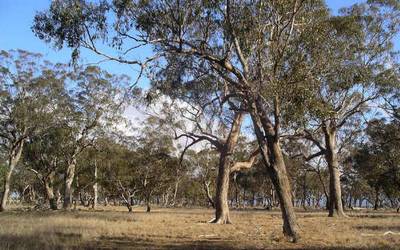 Pinkerton Landcare & Environment Group (PLEG) is concerned with the restoration of native grasslands and grassy grey-box woodlands, including the grassy woodland of Pinkerton Forest, the nearby native grassland in Mulla Mulla Grasslands (Bush's Paddock) and of the adjacent section of the Werribee River Volcanic Gorge, (which adjoins Western Water Treatment Plant at Surbiton Park) within the City of Melton, Victoria, Australia.

View a map of our restoration sites

Pinkerton Landcare & Environment Group is to have its first meeting for 2012 on Tuesday 21st February at 7.30.

Our guest speaker will be Alan Thatcher, of Leadwest, who will speak about the Werribee River Biolinks action Plan.

Some of Alan's details are :

“Alan Thatcher is the project manager for the Werribee River Biolinks Action Plan project. This is a LeadWest project and collaborative effort that is being funded by a combination of a grant from the Vision for Werribee Plains and financial and environmental and planning expertise support from Melbourne Water and the three municipalities of Wyndham, Melton and Moorabool. This initiative came out of the development and implementation of the Werribee Plains Regional Environmental Sustainability Framework launched in 2010 and the accompanying report on ‘Biodiversity connectivity: Resilience of natural assets and systems to climate change and fragmentation by urbanization’. Well recognised major issues for the future health of our biodiversity are the impacts of fragmentation of our biodiversity assets and climate change.   The aim of the this project is to assist tackle these issues by promoting the value of natural waterways and abutting land as biolinks using the Werribee River as a case study that in turn could be applied to other waterways in the Werribee Plains. The project is currently being implemented with the first workshop with key stakeholders held in November last year to discuss the desktop study for the Biolinks Action Plan. The next workshop is to be held in the first half of this year after the draft report has been completed.’ 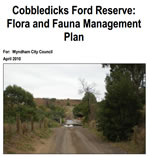